Rhodolite is a varietal name for rose-pink to red mineral pyrope, a species in the garnet group. It was first described from Cowee Valley, Macon County, North Carolina. The name is derived from the Greek “rhodon” for “rose-like”, in common with other pink mineral types (e.g. rhodochrosite, rhodonite). This coloration, and the commonly inclusion-free nature of garnet from this locality, has led to rhodolite being used as a gemstone. Rhodolite like other varietal names is not officially recognized as a mineralogical term, but rather used as an accepted trade name.

Mineralogically and chemically, rhodolite garnets are members of the pyrope-almandine solid-solution series, with an approximate bulk garnet composition of Py70Al30.

Rhodolites from different occurrences around the world have been characterized by crystal chemical and absorption spectral analysis showing that besides iron such elements as manganese, chromium and vanadium may effect the colour of rhodolites.

Rhodolite garnets appear as transparent red-pink-purplish gemstones, including all the different colour shades between violet and red. The colors from different rhodolite sources may vary from a lavender pink to raspberry rose or raspberry red and from purplish-violet (grape) to purplish red.

The color of rhodolites, combined with their brilliance, durability, and the accessibility of stones with no visible inclusions have brought about some demand for the stone in the jewelry industry. Rhodolites used in jewelry are generally faceted to make good use of their brilliance, though they also exist in cabochon form.

Some rhodolites will change color from purplish to a hessonite brown when heated to a temperature of 600 °C. This process cannot be reversed. 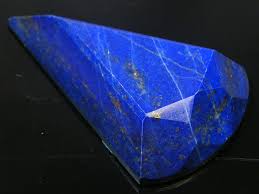 Lapis lazuli (/ˈlæpɪs ˈlæzjʊli, –laɪ/), or lapis for short, is a deep blue metamorphic rock used as a semi-precious stone that has been prized since antiquity for its intense color. As early as the 7th millennium BC, lapis lazuli was mined in the Sar-i Sang mines, in Shortugai, and in other mines in Badakhshan province in northeast Afghanistan.  Lapis was highly valued by the Indus Valley Civilisation (3300–1900 BC). Lapis beads have been found at Neolithic burials in Mehrgarh, the Caucasus, and even as far from Afghanistan as Mauritania. It was used in the funeral mask of Tutankhamun (1341–1323 BC).

At the end of the Middle Ages, lapis lazuli began to be exported to Europe, where it was ground into powder and made into ultramarine, the finest and most expensive of all blue pigments. It was used by some of the most important artists of the Renaissance and Baroque, including Masaccio, Perugino, Titian and Vermeer, and was often reserved for the clothing of the central figures of their paintings, especially the Virgin Mary.

Today, mines in northeast Afghanistan are still the major source of lapis lazuli. Important amounts are also produced from mines west of Lake Baikal in Russia, and in the Andes mountains in Chile. Smaller quantities are mined in Italy, Mongolia, the United States, and Canada.

Lapis is the Latin word for “stone” and lazulī is the genitive form of the Medieval Latin lazulum, which is taken from the Arabic لاجورد lājaward, itself from the Persian لاجورد lājevard, which is the name of the stone in Persian, and also of a place where lapis lazuli was mined. “Lazulum” is etymologically related to the color blue and used as a root for the word for blue in several languages, including Spanish and Portuguese “azul”.

Lapis lazuli usually occurs in crystalline marble as a result of contact metamorphism.

The intense blue color is due to the presence of the trisulfur (S
3) radical anion in the crystal. An electronic excitation of one electron from the highest doubly filled molecular orbital (No. 24) into the lowest singly occupied orbital (No. 25)  results in a very intense absorption line at λmax ~617 nm.

Lapis lazuli is found in limestone in the Kokcha River valley of Badakhshan province in northeastern Afghanistan, where the Sar-e-Sang mine deposits have been worked for more than 6,000 years. Afghanistan was the source of lapis for the ancient Egyptian and Mesopotamian civilizations, as well as the later Greeks and Romans. Ancient Egyptians obtained this material through trade from Afghanistan with the Aryans. During the height of the Indus Valley Civilisation about 2000 BC, the Harappan colony now known as Shortugaiwas established near the lapis mines.

In addition to the Afghan deposits, lapis is also extracted in the Andes (near Ovalle, Chile); and to the west of Lake Baikal in Siberia, Russia, at the Tultui Lazurite deposit. It is mined in smaller amounts in Angola; Argentina; Burma; Pakistan; Canada; Italy, India; and in the United States in California and Colorado.

Lapis takes an excellent polish and can be made into jewelry, carvings, boxes, mosaics, ornaments, small statues, and vases. During the Renaissance, Lapis was ground and processed to make the pigment ultramarine for use in frescoes and oil painting. Its usage as a pigment in oil paint largely ended in the early 19th century when a chemically identical synthetic variety became available.

Lapis lazuli is commercially synthesized or simulated by the Gilson process, which is used to make artificial ultramarine and hydrous zinc phosphates. It may also be substituted by spinel or sodalite, or by dyed jasper or howlite.

Lapis lazuli has been mined in Afghanistan and exported to the Mediterranean world and South Asia since the Neolithic age.  Lapis lazuli beads have been found at Mehrgarh, a neolithic site near Quetta in Pakistan,  on the ancient trade route between Afghanistan and the Indus Valley, dating to the 7th millennium BC. Quantities of these beads have also been found at 4th millennium BC settlements in Northern Mesopotamia, and at the Bronze Age site of Shahr-e Sukhteh in southeast Iran (3rd millennium BC). A dagger with a lapis handle, a bowl inlaid with lapis, and amulets, beads, and inlays representing eyebrows and beards, were found in the Royal Tombs of the Sumerian city-state of Ur from the 3rd Millennium BC.

Lapis was also used in ancient Mesopotamia by the Akkadians, Assyrians, and Babylonians for seals and jewelry. In the Mesopotamian poem the Epic of Gilgamesh (17th-18th Century BC), one of the oldest known works of literature, lapis lazuli is mentioned several times. The Statue of Ebih-Il, a 3rd millennium BC statue found in the ancient city-state of Mari in modern-day Syria, now in the Louvre, uses lapis lazuli inlays for the irises of the eyes.

In ancient Egypt, lapis lazuli was a favorite stone for amulets and ornaments such as scarabs. Lapis jewelry has been found at excavations of the Predynastic Egyptian site Naqada (3300–3100 BC). At Karnak, the relief carvings of Thutmose III (1479-1429 BC) show fragments and barrel-shaped pieces of lapis lazuli being delivered to him as tribute. Powdered lapis was used as eyeshadow by Cleopatra.

Jewellery made of lapis lazuli has also been found at Mycenae attesting to relations between the Myceneans and the developed civilizations of Egypt and the East.

In late classical times and as late as the Middle Ages, lapis lazuli was often called sapphire (sapphirus in Latin, sappir in Hebrew), though it had little to do with the stone today known as the blue corundum variety sapphire. In his book on stones, the Greek scientist Theophrastus described “the sapphirus, which is speckled with gold,” a description which matches lapis lazuli.

There are many references to sapphires in the Old Testament, but most scholars agree that, since sapphire was not known before the Roman Empire, they most likely are references to lapis lazuli. For instance, Exodus 24:10: “As they saw the God of Israel, and there was under his feet as it were a paved work of a sapphire stone..” (KJV). The term used in the Latin Vulgate Bible in this citation is “lapidus sapphiri,” the term for lapis lazuli. Modern translations of the Bible, such as the New Living Translation Second Edition, refer to lapis lazuli in most instances instead of sapphire. 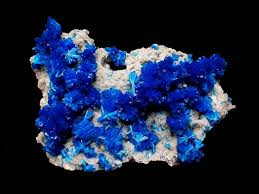 Cavansite, whose name is derived from its chemical composition, calcium vanadium silicate, is a deep blue hydrous calcium vanadium phyllosilicate mineral, occurring as a secondary mineral in basaltic and andesitic rocks along with a variety of zeolite minerals. Discovered in 1967 in Malheur County, Oregon, cavansite is a relatively rare mineral. It is polymorphic with the even rarer mineral, pentagonite. It is most frequently found in Pune, Indiaand in the Deccan Traps, a large igneous province.

While cavansite does contain vanadium, and could thus be a possible ore source for the element, it is not generally considered an ore mineral. However, because of its rich color and relative rarity, cavansite is a sought after collector’s mineral.

Cavansite is a distinctive mineral. It tends to form crystal aggregates, generally in the form of balls, up to a couple centimeters in size. Sometimes the balls are coarse enough to allow the individual crystals to be seen. Rarely, cavansite forms bowtie shaped aggregates. The color of cavansite is distinctive, almost always a rich, bright blue. The color is the same as its dimorph, pentagonite, but the latter is generally much more spikey with bladed crystals. Finally, the associated minerals are useful for identification, as cavansite is frequently found sitting atop a matrix of zeolites or apophyllites. 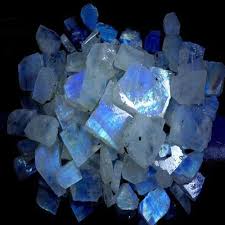 Moonstone is a sodium potassium aluminium silicate with the chemical formula (Na,K)AlSi3O8 and belongs to the feldspar group. This beautiful stone was used in ancient times, as it was believed to bring great luck.

Its name is derived from a visual effect, or sheen, caused by light diffraction within a micro-structure consisting of regular feldspar layers (lamellae).

Moonstone has been used in jewelry for millennia, including ancient civilizations. The Romans admired moonstone, as they believed it was born from solidified rays of the Moon. Both the Romans and Greeks associated moonstone with their lunar deities. In more recent history, moonstone became popular during the Art Nouveau period; French goldsmith René Lalique and many others created a large quantity of jewelry using this stone.

The most common moonstone is of the mineral adularia, named for an early mining site near Mt. Adular in Switzerland, now the town of St. Gotthard.The plagioclase feldspar oligoclase also produces moonstone specimens. Moonstone is feldspar with a pearly and opalescent schiller. An alternative name is hecatolite.

Moonstone is composed of two feldspar species, orthoclase and albite. The two species are intermingled. Then, as the newly formed mineral cools, the intergrowth of orthoclase and albite separates into stacked, alternating layers. When light falls between these thin, flat layers, it scatters in many directions producing the phenomenon called adularescence

The moonstone Is believed to have many powers. It’s said to bring special healing powers and fortune to those who wear it or hold it. It was used in ancient rituals and also used as gifts to the moon deity It’s also believed to bring great luck. 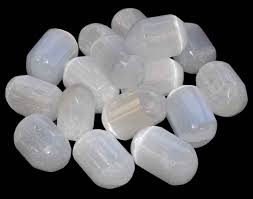 All varieties of gypsum, including selenite and alabaster, are composed of calcium sulfate dihydrate (meaning that it has two molecules of water), with the chemical formula CaSO4·2H2O. Selenite contains no significant selenium; the similarity of names comes from both substances being named from the Ancient Greek word for the Moon.

Some of the largest crystals ever found are selenite crystals – the largest specimen found in the Naica Mine‘s Cave of the Crystals is 12 metres long and weighs 55 tons.

The etymology of selenite is through Middle English selenite, from Latin selenites, from Greek selēnitēs (lithos), literally, moonstone or stone of the moon, from selēnē (Moon). The ancients had a belief that certain transparent crystals waxed and waned with the moon. From the 15th century, “selenite” has referred specifically to the variety of gypsum that occurs in transparent crystals or crystalline masses

All varieties of gypsum are very soft minerals (hardness: 2 on Mohs Scale). This is the most important identifying characteristic of gypsum, as any variety of gypsum can be easily scratched with a fingernail. Also, because gypsum has natural thermal insulating properties, all varieties feel cold to the touch.